1 . In a first, collegium selects woman advocate for SC judge

The Supreme Court collegium, headed by CJI Dipak Misra, created history  by picking Indu Malhotra as the first woman advocate to be recommended for appointment as a judge of the SC, which has had just six woman judges in 68 years . All six were elevated from high courts . The collegium also recommended the appointment of Uttarakhand HC Chief Justice Kuttiyil Mathew Joseph as an SC judge.

Malhotra, 61, became in August 2007 the second woman lawyer to be designated as a senior advocate by the SC, three decades after the honour was first bestowed on Leila Seth, who went on to become the first woman chief justice of a high court. Seth was designated as a senior advocate in 1977. If the government accepts the recommendation to appoint Malhotra as an SC judge, she will have a term of nearly four years.

Types of Advocate  in Supreme Court

Supreme Court and Each High Court  has power to Designate an Advocate as Senior Advocate. Once an advocate is designated as senior advocate, he cannot file Vakalatnama (Power to represent client ) in any court in India.

He cannot argue in any court unless he is also assisted and instructed by other advocate. He cannot draft matters or any kind of documentation for any clients. They are supposed to Lead High Standards of Legal Profession by being an ideal role model for other advocates.

Judges of various High Courts, after their retirement in High Court, come to practice in Supreme Court. They are usually, normally designated as Senior Advocate by Supreme Court.

The fourth layer advocates are those who are practising mainly in other courts all over India, but they occasionally come to Supreme Court to argue cases. No minimum experience is prescribed for them for arguing cases in Supreme Court.

China’s plan for a modern Silk Road of railways, ports and other facilities linking Asia with Europe hit a $14 billion pothole in Pakistan.

Pakistan’s relations with Beijing are so close that officials call China their “Iron Brother”. Despite that, plans for the Diamer-Bhasha Dam were thrown into turmoil in November when the chairman of Pakistan’s water authority said Beijing wanted an ownership stake in the hydropower project. He rejected that as against Pakistani interests.

From Pakistan to Tanzania to Hungary, projects under President Xi Jinping’s signature ‘Belt and Road Initiative’ are being cancelled, renegotiated or delayed due to disputes about costs or complaints that host countries get too little out of the projects. In some areas, Beijing is suffering a political backlash due to fears of domination by Asia’s biggest economy.

Belt and Road, announced by Mr. Xi in 2013, is a loosely defined umbrella for Chinese-built or -financed projects across 65 countries from the South Pacific through Asia to Africa and Europe.

Among projects that have been derailed or disrupted, authorities in Nepal cancelled plans in November for Chinese companies to build a $2.5 billion dam after they concluded contracts for the Budhi Gandaki Hydro Electric Project violated rules requiring multiple bidders.

China has objected to Vietnam’s invitation to India to invest in oil and natural gas sector in the disputed South China Sea, saying it is firmly opposed to infringement of its rights using development of bilateral ties as an “excuse”.Vietnam has recently  welcomed Indian investments in the South China Sea.

According to China it does not object to the development of normal bilateral relations of relevant countries in its neighbourhood. But China firmly oppose relevant party to use it as an excuse to infringe upon China’s legitimate rights and interests in the South China Sea and impair regional peace and stability.

Oil exploration in the SCS is a sensitive issue in the Vietnam-China relations. There were anti-China riots in Vietnam when China tried to deploy oil rigs in an areas claimed by Vietnam few years ago.

China has been opposing Oil and Natural Gas Corporation exploring oil in wells claimed by Vietnam in the South China Sea for years . China claims almost all of the South China Sea while Vietnam, the Philippines, Malaysia, Brunei and Taiwan have counter claims. After a lull of over four months, the Indian Space Research Organisation is back in the game as its workhorse Polar Satellite Launch Vehicle (PSLV-C40) successfully placed 31 satellites in two different orbits in one of the longest missions.

The launch was also significant for another reason. ISRO demonstrated multiple-burn technology that it tested in three previous launches. This is PSLV’s 40th successful launch project .

The rocket injected its main payload- the 710kg weighing Cartosat-2 series, the seventh satellite in the series, into a polar sun synchronous orbit at an altitude of about 510km. Within a span of around seven minutes, the rocket ejected 29 satellites as it maneuvered its way up the altitude to 519km.

The PSLV-C40 mission is happening four months after the failure of PSLV-C39. PSLV-C39, which lifted off on August 31 last year, failed after the heat shield, the tip of the rocket, did not open as programmed. The satellite separated from the rocket circling in space within the closed heat shield.

The main payload was Cartosat-2 Series satellite which will provide regular remote sensing services using its panchromatic and multispectral cameras. The images sent by the satellite will be useful for cartographic applications, urban and rural applications, coastal land use and regulation, utility management like road network monitoring, water distribution, creation of land use maps, change detection to bring out geographical and man-made features and various other land information system (LIS) as well as geographical information system. 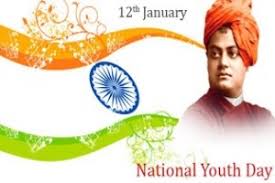 The National Youth Day is observed all over India at schools and colleges, with processions, speeches, recitations, music, youth conventions, seminars, Yogasanas, presentations, competitions in essay-writing, recitations and sports .

In 1984, The government said that “the philosophy of Swamiji and the ideals for which he lived and worked could be a great source of inspiration for the Indian youth” and since then, Swami Vivekananda’s birth anniversary is being celebrated as National Youth Day. Swami Vivekananda’s thought-provoking lectures, quotes and writings, have been a subject of study and a great source of motivation for the youth.

The 22nd National Youth Festival 2018 was inaugurated  at the Gautam Buddha University in Greater Noida on January 12. The Festival has commenced on the occasion of birth anniversary of Swami Vivekananda .The theme of  the 5-day festival is ‘Sankalp Se Siddhi’.

Industrial output growth quickened in November to a 25-month high of 8.4% bolstered by strong performances in the manufacturing, construction, and consumer non-durables sectors .

The acceleration in the Index of Industrial Production (IIP) growth was significant, coming after October’s 2.24% increase. Growth in the manufacturing component of the index touched 10.2% in November, up from 2.47% in the previous month. This strong performance was accompanied by a 13.5% jump in the infrastructure and construction sector, up from 5.21% in October.

Economists said a low base in November 2016, when the government demonetised high value currency, IIP grew 5.1% even as the index number itself shrank from the preceding month and public spending contributed to the stronger IIP reading.

Growth in manufacturing in November was led by strong double-digit growth in ‘food products’, ‘pharmaceuticals, medicinal chemical and botanical products’, and the ‘computer, electronic and optical products.’

The other sector that saw robust growth was consumer non-durables, which grew 23.1% in November, up sharply from 7.7% in the previous month. The consumer durables sector grew 2.5%, recovering from October’s 6.89% contraction.