QUES 1 . Which among the following are the advantages of Masala bonds-

1 . Access to cheaper funding from overseas than what’s available in the domestic markets.

2 . Such bonds would lower the cost of capital over a period of time.

Which among the above statements is/are correct?

QUES 2 . Consider the following statements with respect to Masala bonds-

1 . The term is used to refer to rupee-denominated borrowings by Indian entities in overseas markets.

2 . They are same as  External Commercial Borrowings or ECBs.

Which among the above statements is/are correct?

The term is used to refer to rupee-denominated borrowings by Indian entities in overseas markets.

Masala bonds have to be explained in the context of Indian corporates raising money from overseas investors. Before masala bonds, corporates have had to rely on avenues such as external commercial borrowings or ECBs. The challenge with the likes of ECBs is the entity raising money is faced with a currency risk – they have to be raised and repaid in dollar terms. A year is a long time in forex markets – currencies fluctuate sharply. So, imagine the risk a bond issuing entity, especially one with largely rupee earnings, if issue and repayment are years apart. 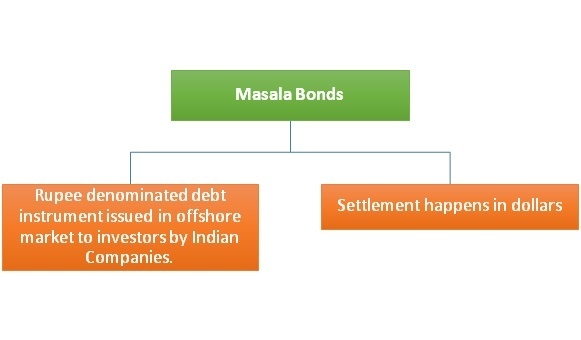 Why IFC named  the bonds as Masala bonds?

The International Finance Corporation (IFC), the investment arm of the World Bank, issued a ₹1,000 crore bond to fund infrastructure projects in India. These bonds were listed on the London Stock Exchange (LSE). IFC then named them Masala bonds to give a local flavour by calling to mind Indian culture and cuisine.

While it may seem odd to name a debt instrument after food stuffs, it has been done in the past. Chinese bonds, named Dim-sum bonds after a popular dish in Hong Kong, have been around for while. So have Japanese bonds named Samurai after the country’s warrior class.

How it is different from other instruments?

With a masala bond, a corporate could issue Rs. 10 billion worth of bonds with the promise of paying back Rs. 11 billion in one year. But as the Indian rupee has limited convertibility, the investors will lend the dollar equivalent of the Rs. 10 billion. After one year, the Indian corporate needs to pay back the dollar equivalent of Rs. 11 billion. The currency risk is with the investor.

Made attractive for investors

The Finance Ministry has cut the withholding tax (a tax deducted at source on residents outside the country) on interest income of such bonds to 5 per cent from 20 per cent, making it attractive for investors. Also, capital gains from rupee appreciation are exempted from tax.

However investors would need to keenly watch the credibility of the issuer. For example, it would easy for an HDFC or NTPC to raise the bond when compared to a smaller firm. Higher the credit rating of a firm, the better would be the appetite for their issues. Since the currency risk is on the investors, they will like the rupee to be stable.

An important consideration for issuers is the access to cheaper funding than what’s available in the domestic markets, according to ratings firm S&P. For corporates, who would be the main issuers, masala bonds will be one other key source of funding apart from banks and local debt markets.

Another ratings firm India Ratings and Research says such bonds would lower the cost of capital over a period of time – the cost remains one of the highest in Asia. This also makes sense given that Indian banks are reluctant to lend to sectors facing weak demand and heavy debt.

The rules put the issue limit to $750 million and also has a pricing cap for various tenures of issue.

The move to permit masala bonds is an attempt to increase the international status of rupee and is also a step toward full currency convertibility (the freedom to convert Indian currency into other internationally accepted currency without any restrictions).